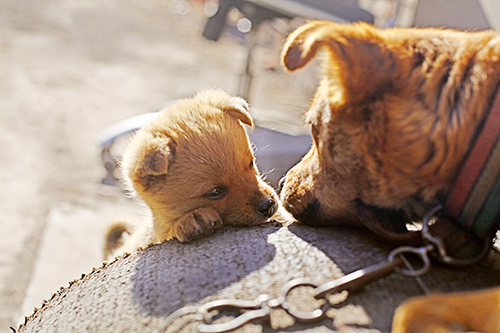 What is a mutation?

Each time that DNA is replicated, errors can be made. DNA is made up of “base pairs” and one base may be switched for another base, for example an A switched with a C. An extra base may be added or a base may be deleted. In more severe situations, an entire section of the genetic code can be deleted or moved to a different location.

Depending on where in the DNA this mutation occurs, the effects of these mutations may vary from nonexistent to severe (see article “Understanding DNA” for more information on bases).

How do animals get mutations?

Mutations can occur during the life of an animal (acquired—affecting only a single cell) or can be inherited from a parent (present in all of the body’s cells). When a cell is affected by a mutation, all cells arising from that cell are likely to carry the mutation. In the case of an acquired mutation, this may be only a small number of cells. In the case of a reproductive cell, the mutation will affect all of the offspring’s cells.

How does an acquired mutation arise?

Many mutations arise spontaneously. These spontaneous mutations are caused by errors in replication. With large numbers of DNA being replicated throughout the body on a daily basis, mistakes sometimes occur. The body has mechanisms to detect and repair these errors, but the mechanisms are not always effective.

What are the effects of mutations?

The effects of mutations depend on the size and location of the mutation. Much of an animal’s genetic code consists of what is called non-coding DNA. These non-coding regions do not contain genes that code for protein production. Mutations in this area may have no effect on the animal or its offspring.

If an acquired mutation occurs in a coding region of DNA, the effects will vary depending on the mutation. Perhaps the most concerning effect of an acquired mutation is the formation of cancer. For example, solar radiation damage can lead to cell mutations that may result in squamous cell carcinoma or other cancers.

"...the most concerning effect of an acquired mutation is the formation of cancer."

How are genetic mutations related to genetic markers?

A marker is a specific segment of DNA with known characteristics. While the specific sequences may vary between individual, there is enough consistency in the genetic code at that particular site on the genome to allow comparison between individuals. Markers are often located in non-coding areas of the DNA, where a specific base pattern repeats many times and these repeating segments are known and mapped.

How are markers helpful?

Closely related animals often have similar mutations in their marker regions of DNA. Therefore, analyzing these known marker regions can allow scientists to determine the degree of relationship between two DNA samples. Looking for genetic markers can be valuable in determining the genetic heritage of an animal, such as in the case of determining the breeds of origin of a mixed-breed dog.

© Copyright 2021 LifeLearn Inc. Used and/or modified with permission under license.

”If I could give them 10 stars I would. We’ve been going for 10 years. In all my years of going to vets I’ve never found one that compares in any category!

We look forward to seeing you soon